It’s mid September and the sun is still shining. Around four thousand people are marching through the streets for Nottinghamshire Pride, cancelled last year and delayed this year because of Covid. At the front of the parade, colourful costumed dancers, a fire engine – and behind them, hundreds of rainbow flags, along with the more recent blue and white logo supporting trans rights.

If you didn’t know better, you’d think that Nottingham was a place with a large “gay scene” – to use a wide ranging term. After all, these people are proud of Pride, and all looks well in the world. But there’s more to inclusivity than a big parade.

Amid the various groups on the march is Adam, a regional Chair from Unite The Union. He’s seen Nottingham’s scene develop and decline over a number of years, but is worried that event today there is a reluctance to publicly show affection in what would be termed a “straight bar”.

“People are more afraid of expressing their views. If someone was ‘out out’, some people would still see that as offensive, and after a few drinks that could be a problem. The pub scene is always in a constant state of change. Some of the mainstream pubs wouldn’t tolerate any nonsense, but we still need pubs that are definite LGBT spaces.” 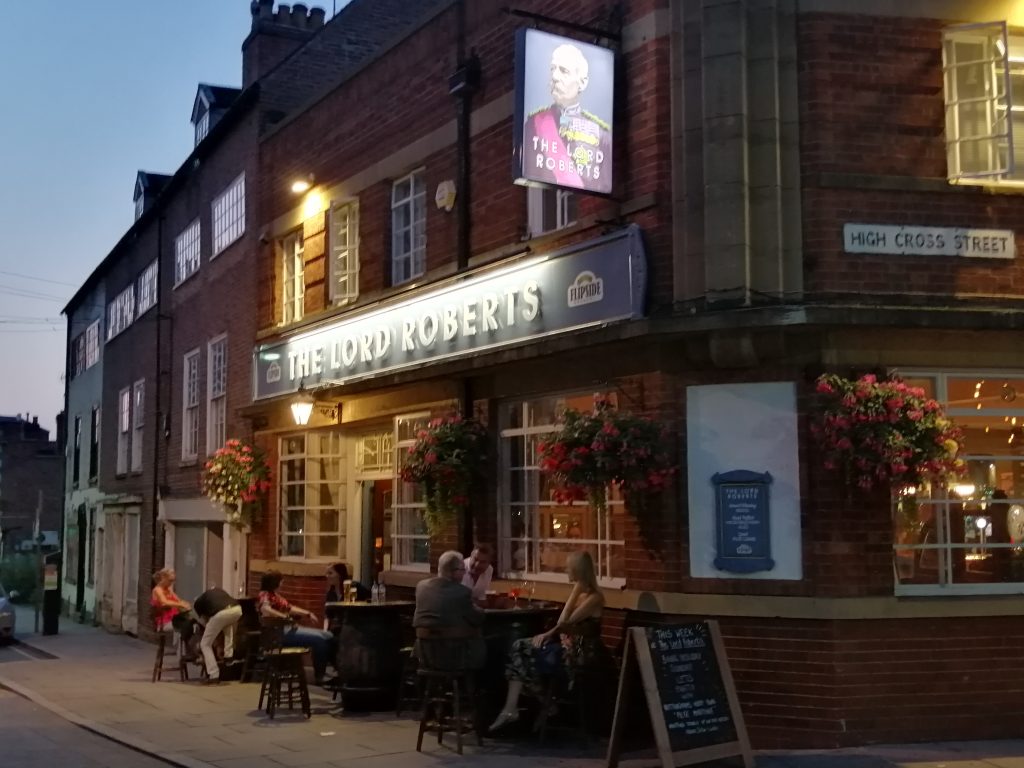 In Hockley, Broad Street has become a self serving symbol of inclusivity, with rainbow pedestrian crossings and The Lord Roberts pub, seemingly the one constant in a scene that has otherwise vanished. Natalie is outside with her friend Georgie, who’s visiting from Leamington Spa, who’s enthusing about her experience : “I fell welcome everywhere we’ve been – it’s such a great city”

But Natalie is more sceptical “The Lord Roberts always stayed trued to itself – it’s one place you can go to and it’s mostly LGBT people. It’s easy to question why we need gay spaces, but if you go to some parts of Nottingham you can see that attitudes still haven’t changed. And when it comes to Pride, places like Revolution just capitalise on the day, but aren’t always all the welcome the rest of the time. I do like the Broadway (Cinema and cafe bar) though.”

On a celebratory, sunny day, Broad Street is alive with friendliness. Alfresco dining adds to the atmosphere. Yet it’s just a couple of blocks away from two venues – Propaganda and NG1 – which shunned their LGBT clientele in favour of a mainstream crowd. It didn’t end well for Propaganda, which has now closed and is being converted into offices.

One place that does nail its rainbow colours firmly to the door is the New Foresters, a frequent recipient of Camra awards for its community feel, and recently the home to a new pink plaque reflecting Nottingham’s LGBTQ+ heritage.

The best pubs really are all things to all people – a place that welcomes a truly mixed crowd is one that creates the perfect atmosphere for safe drinking and socialising. It would be delusional – and wrong – to think that one day there will be no need for Pride (as we sometimes overhear in conversations). But there’s still plenty of room to expand Nottingham’s scene. It just needs people with the right business brain to do it.